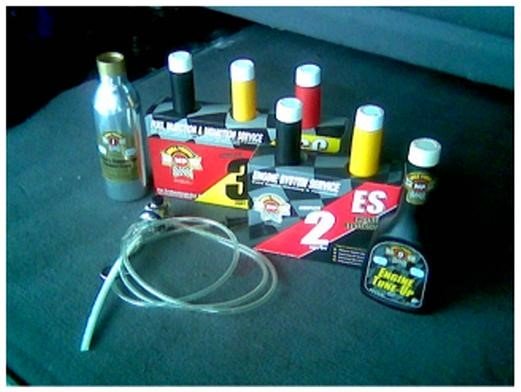 I discovered Mega Power at the big Vegas auto industry show. I like it as it was packaged to clean engine rings and valves and included a great fuel injector cleaner. And it raises engine vacuum.

I like the idea because the cars computer uses it to tune the engine as you drive - until vacuum is so bad it can't.

I was trained to use instruments to determine what's wrong with each engine to determine its fix. One of them - seldom ever used is the vacuum gauge.

It reading tells you the state of the motor inside.

After I started using this Mega Power Engine Treatment in my tuneups I started getting customer raves and comments about snappy engine response from its friction eliminating ingredients MC+. Some said, it added 20 to 40 more miles distance to each tank of fuel.

Other customers told me of it ending their motors oil consumption.

The odd thing about that is, those mechanics and repair shops I showed to use the product [for an extra income for myself] - to give their customers a better tune up -  and a bit more income for the shop, also reported their customers saying, it ended their engine oil consumption, too.

Some of the aggressive shops, seeing it as a new source of income, started tripling Mega Power's price selling it to customers as a cure to end oil burning. I could not believe their savvy to do so. So I started doing the same thing. And kept them supplied to meet the new demand.

Some of my customers wanted to buy extras and I added directions to guide them. Over time it was sold to tens of thousands of car and diesel owners for several hundred dollars, [in 5 gallons, $400 for large oil capacity engines] - as an engine oil consumption remedy.

Some people go for a $4000 to $7000 engine overhaul. But many find this Mega Power as the ideal engine oil consumption remedy. About it...

A 2 step method and an oil change of its usage before and after, stops engine oil consumption. It  comes with direction and my free phone help for $195. And a satisfaction guarantee. A good product to avoid an expensive alternative. Free for trying if your engine is beyond help.

Mike from N C says, it made his engine go from "noisy engine" oil consumption to a sweet running - music to his ears, no more oil burning from his engine solution.

Feel this could be music to your ears and wallet?

In 3 days you will have it at your door - an easy install - and have your own engine music making method to end engine oil consumption.